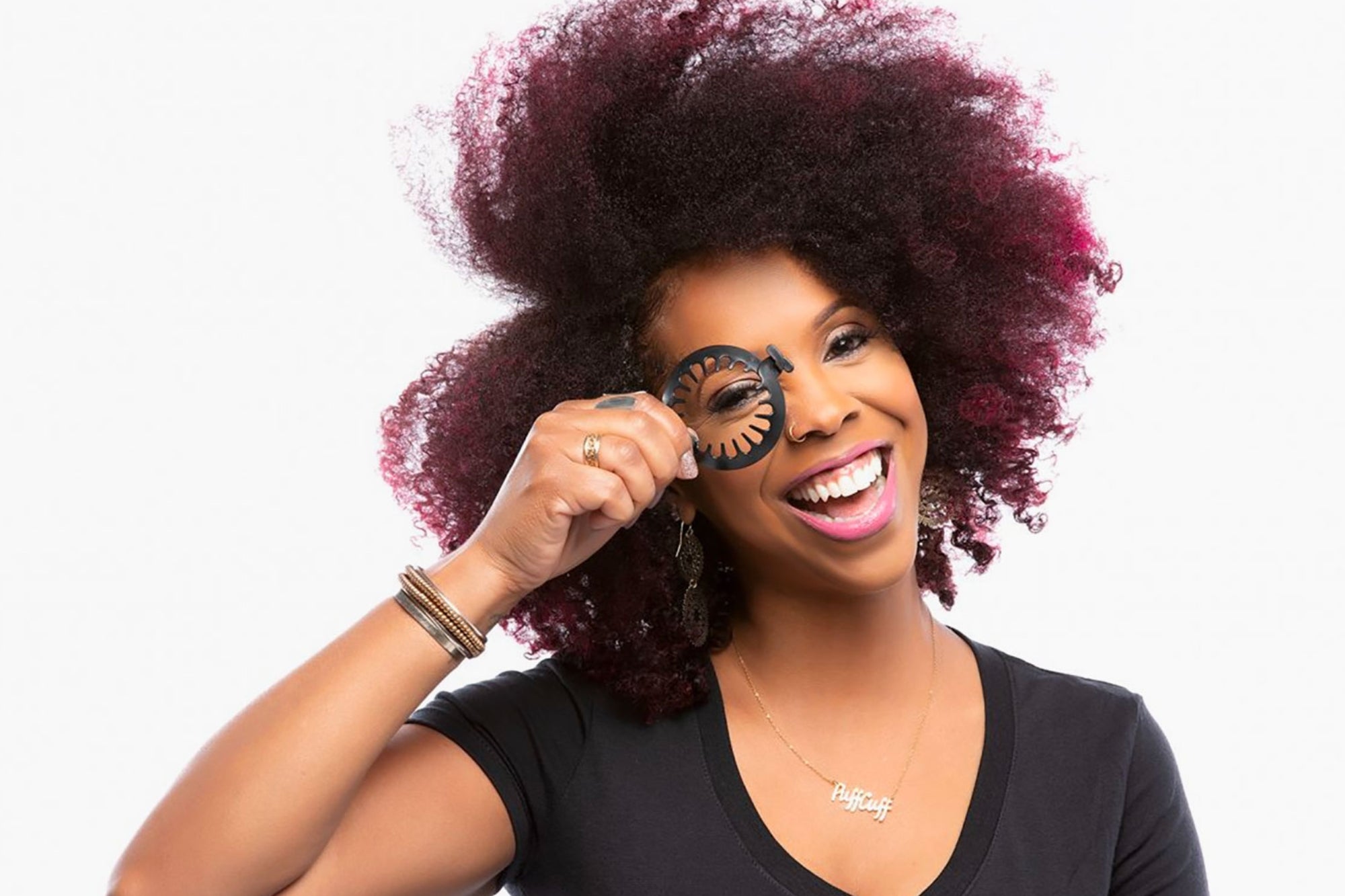 Entrepreneurial, innovative, and faithful are among adjectives that describe Ceata Lash, the founder and inventor of the PuffCuff.

Lash in 2013 launched PuffCuff, a user-friendly hair clamp and unisex styling tool not just for women. An industry disruptor, the easy-to-use accessory upholds curls and kinks without the tension and strain linked with elastic bands and other hair ties.

She searched stores and online for such an accessory but did not find one that worked comfortably for her naturally thick hair without getting a headache. Those discoveries—and inspiration from her late grandmother—sparked Lash to start her company.

“The PuffCuff Hair Clamp was developed from a simple idea: create a tool that not only makes it easy to achieve stylish looks without stressing your hair or causing pain but one that is sanitary, durable, and affordable too,” Lash says.

The hair clamp rapidly became a smash in the beauty accessories industry. Since its inception in 2014, PuffCuff now has more than 115,000 customers globally, Lash says. It is sold online by PuffCuff, Amazon.com, and Sally Beauty. Some 50 small independently owned foreign retailers sell it as well, including in Australia, the Netherlands, and Spain. PuffCuff is based in the Atlanta suburb of Marietta.

Now, Lash has ambitious growth goals. The first Black woman to hold three patents in her industry, Lash’s aim is to build PuffCuff up to a $25 million evaluation in the next five years. Her company’s current market value is $6 million.

She is bullish her firm’s value will appreciate greatly as it operates in the global haircare business that generates more than $85 billion in annual revenues and includes 65% of the world’s population with curly hair.

Another potential market value booster for PuffCuff is that it has no rivals. Lash says her patents have allowed her first market access but also made her a target. Her firm has spent more than $100,000 in legal fees protecting against copycats being sold in America.

In the next five years, she is confident her firm will see significant increases in revenue. She expects the gain to come from multiple sources, including PuffCuff along with products/sub-brands under it. PuffCuff plans to launch a male product line. And there is more.

“I still have another patented product to produce that will address the needs of an even larger market segment,” Lash says.” “And we have another initiative that I cannot disclose.”

Lash owns 100 percent of PuffCuff. Her husband, Garrett Lash, has been its CEO since 2017. A seasoned executive with an IT background from the financial and insurance sectors, his duties include acquiring new business, operations, and developing strategic goals. The business is allowing the couple to build generational wealth for their three sons. 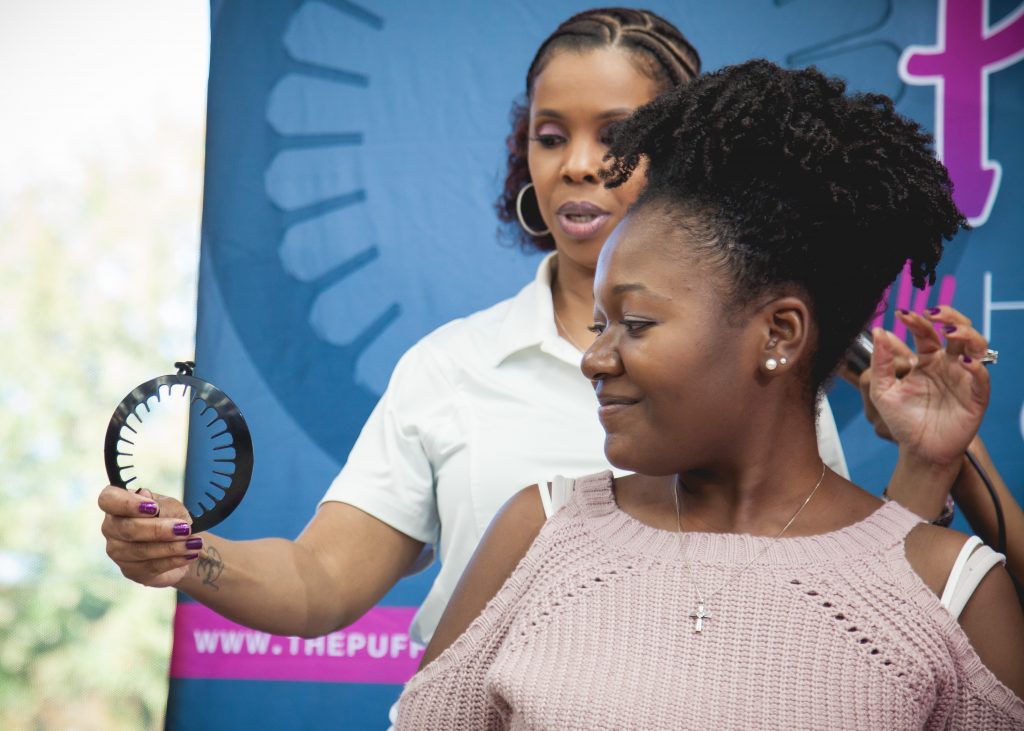 PuffCuff has posted steady revenue growth, bringing in $80,000 in 2014, $1.3 million in 2019, and $2.2 million in 2020. Lash projects 2021 revenue up to $5 million, with the rise largely coming from online consumer sales. “I think we’ll have a banner year in 2021 because of the increased exposure and new opportunities created for Black businesses resulting from the greater attention placed on systemic racism last year,” she says.

But the journey has not been a breeze. Lash says having no seed money was among the biggest challenges initially. In 2014 she got a $16,000 loan from a nonprofit lending institution, but her husband still had to co-sign. She also used her 401(k) and borrowed against their life insurance policies. In 2017, she got a $50,000 loan from a nonprofit that lends to the underserved.  “Traditional lending institutions were not and still do not give people that look like my money when they need money,” she says.

The bottom line: PuffCuff has survived on revenue for its growth. “No secret. No sauce. Just the grace of God and determination,” Lash says. In 2018, she won the President’s Innovation Award from Sally Beauty, giving PuffCuff retail distribution at all 3,000 Sally Beauty stores in the U.S. and Canada as well as online distribution at www.sallybeauty.com.

Another obstacle Lash had to conquer was not having anyone in her immediate personal or professional network to emulate or ask for advice. “I was naïve but determined,” she says. “I knew the Lord would put the individuals needed at the right time and the right place. I needed to seek him for discernment.”

She noted PuffCuff just ran a successful equity crowdsourcing campaign that helped alleviate some of its supply chain issues, and it next plans to seek investors for future funding. And like other businesses, PuffCuff has had ups and downs from COVID-19. Some of its employees tested positive and major shipping delays occurred. Due to COVID, PuffCuff got two SBA loans for the first time ever, allowing the business not to lay off any of its 10 employees. “Also, whole families were at home letting their curls grow,” Lash says. “2020 was the year for e-commerce growth.”

On giving back to the community, PuffCuff has and continues to donate to local and national efforts. That includes donations to fight systemic racism, African American Adoption Awareness, Atlanta Public Schools, and other causes. It recently donated more than $3,000 to groups that raise awareness tied to abuse of systemic power, police brutality, and injustice.

“As long as my husband and I are at the helm, we will support those projects,” Lash says.