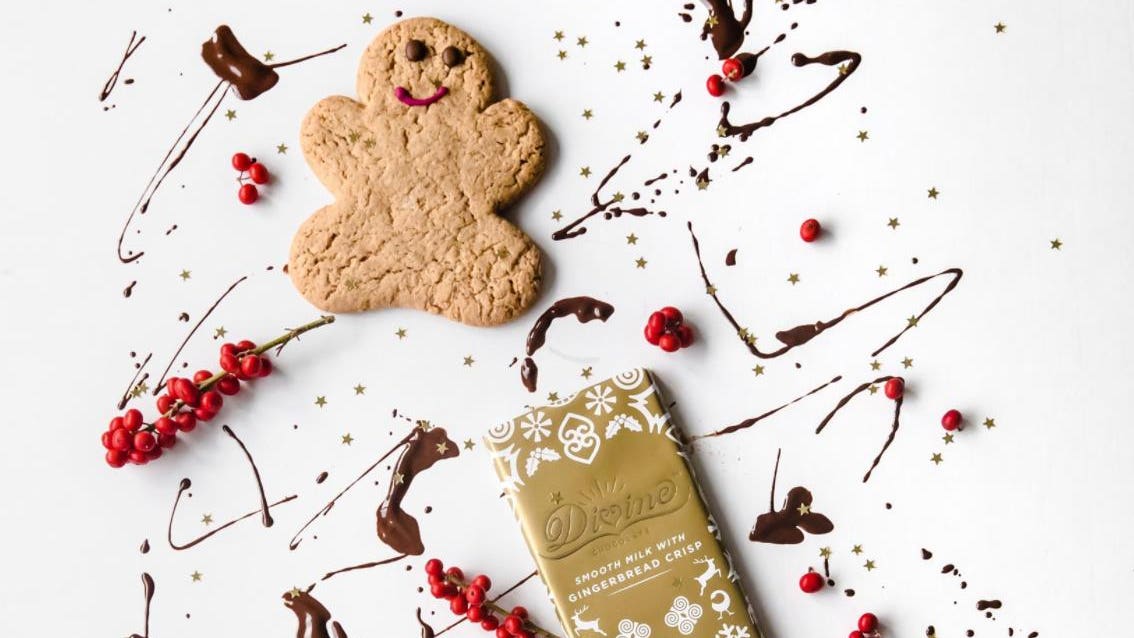 These food businesses are thinking beyond taste. If you’re looking for culinary gifts, these companies are investing in their farmers, rethinking their packaging, and trying to craft a new food movement that’s people and planet-friendly.

Marshall’s Haute Sauce is made in small batches by Sarah Marshall herself in Portland, Oregon, and has been a staple of the Portland farmers market community for nearly a decade. They are dedicated to highlighting the freshest produce sourced directly from the local farmers around them. Sarah’s love of gardening, her experiments in home preserving, and canning seasonal ingredients led her to create this small business. Her four core sauce varieties, which are all delightful and on a spectrum of heat — come in a very giftable sample pack.

Produce delivery company Imperfect Foods, known for the the leftover and gleaned veg/fruit, has come out with a new holiday offering that claims to save nearly 9 lbs of food from going to waste with each box, and proceeds will also go towards the brand’s continued support of Feeding America. Each box contains snacks that has its own rescue story. The box includes, for example, dried mango that was too “sunburnt” from sun exposure to be sold in stores; peppermint and dark chocolate covered pretzel pieces that were broken and rejected as the ideal pretzel (but perfectly edible); and whole almonds that were going to be tossed for having blemishes.

This new coffee company is utilizing the widespread ritual of coffee as leverage to regenerate soil on a global scale. Overview coffee is sourced from farms around the world that utilize various practices to ensure they’re actively working to enrich the biodiversity of their land, ensure the health of their community, and increase their resilience to climate change. More than half of the adult population on earth drinks coffee every day and Overview believes that every one of those coffee lovers can take part in the agricultural revolution needed to reverse the detrimental effects of climate change by doing something they already habitually enjoy.

A delectable Fairtrade Christmas chocolate haul that you can feel good about with flavors for milk, dark, and nut-flavored chocolate enthusiasts. Divine Chocolate, which is 20 percent owned by the farmers who produce their cocoa, also works to empower women in leadership roles in the cocoa trade in Ghana. In addition, the brand now has an organic selection of bars as well, and is expanding its supply chain to the western island of São Tomé to source this organic cocoa from a co-operative of 1,000 farmers, half of which are women.

In the past decade, fourth-generation California farmer Vincent Ricchiuti and his family have not only planted over 400 acres of olive trees, but have made a brand for themselves as one of California’s few organic olive producers. This selection box highlights some of their best, all produced in a mill (brought over from Italy) in the San Joaquin Valley. For their flavored oils like clementine, chili, and basil, these ingredients are crushed along with the oil to infuse the oil and produce a pungent flavor. The gift sets are a good way to sample their offering — the Extra Virgin Olive Oils and a few flavored varieties.

Jacobsen Salt Co. has been quietly transforming the salt industry for the past decade. This holiday season, founder Ben Jacobsen wants Americans to pay a little more attention to one of the simplest ingredients on the dinner table: the unassuming container of salt. Though the company harvests and produces their own line of salts (primarily kosher and pure flake sea salt from Netarts Bay in Oregon), they also source salts from around the world — Italy, Peru, France and the Himalayas, which are featured in a gift box. Since travel is largely cancelled, explore the world of salts at the dinner table.

The pandemic has caused many small coffee businesses to shut their doors. This startup is hoping to give independent roasters in the US a new outlet to sell their coffee — and support their communities as they ride this economic rollercoaster. Trade Coffee, started in 2018, is a marketplace of more than 400 independent roasters — from Kickapoo Coffee in Wisconsin, which made news for offering a staggering $2.70 per pound for green coffee when global coffee prices plummeted to $1.40 per pound to Red Rooster Coffee, a small roaster situated in Floyd, Virginia, a town of 450 residents. For the coffee nut in your friend circle, who loves to find new roasters, this could be the ideal subscription.

When Yvon Chouinard is asked why an outdoor clothing brand is now going down the road of food, this is his response: “That’s the revolution I want to be a part of. Why is Patagonia making and selling food? The real question, to me, is how could we not? I realize, now more than ever, that the requisites for a thriving business and thriving people are one and the same. Triple bottom line? Food, water, love.” And their sampler box showcases their values in a scrumptious way — buffalo jerky (made with bison from the Badlands of South Dakota), wild salmon from the Pacific Northwest, dried mango from a regenerative organic farm in Nicaragua, chili with ancient grains grown in America, and more.

Vermont-based Runamok Maple maintains a sugarbush, from which they source their coveted syrup, with care. The trees and the wildlife they support are just as important to this small-batch producer. Once the syrup is brought into the “sugarhouse” where it’s packaged and stored, the whole production is powered by solar to reduce their footprint. If you’re looking for a special treat, consider one of their infused options, which come in an array of flavors, or go pure, and get a really great bottle of Vermont maple syrup for the friend who loves a stack of pancakes on a Sunday morning.

Working with saffron farmers in Afghanistan, former US military veterans who had served in the country started Rumi Spice to bring about peace and an economy for these local farmers while cutting down on middlemen. This B Corp has now expanded their offering to include other spices grown in Afghanistan. This spice set, complete with an artisan-made mortar and pestle from Tunisia, includes: black cumin grown wild along the foothills of Afghanistan’s Hindu Kush mountains; coriander farmed in the Herat region, and fennel which grows wild in the rugged outskirts of the Herat.

Truffles can be a naughty indulgence. Alter Eco makes them slightly less naughty when you know what goes into making these organic, clean delights and how the company invests in its growers. Made with organic coconut oil from India’s Malabar coast and packaged in compostable wrappers, these little holiday treats are worth splurging on for yourself and your loved ones. Alter Eco sources 100 percent of its ingredients from small farmers around the world, many of which operate in farmer-owned co-operatives that are Fairtrade certified, and has been encouraging (and working alongside) cacao farmers to diversify their crop and pursue regenerative agriculture.