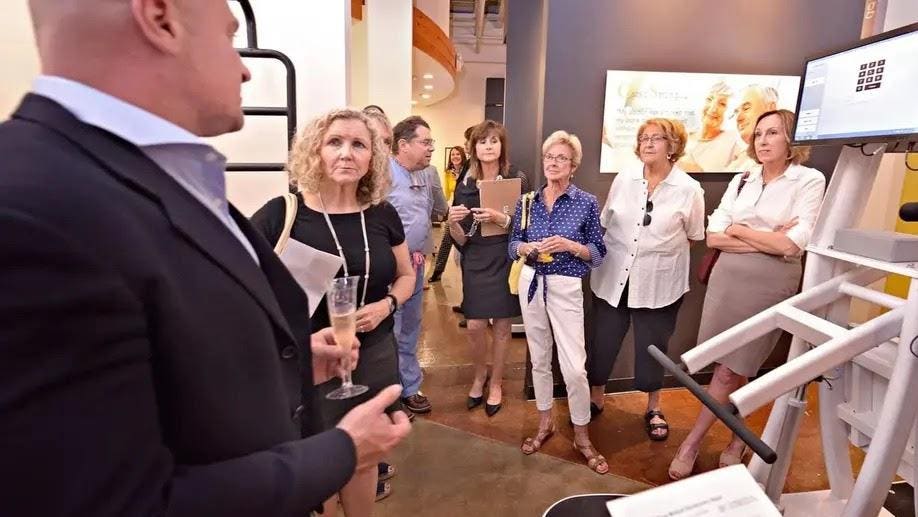 A lot of entrepreneurs talk about “disrupting their industry.” They want their idea to smash into the landscape like an asteroid, sending up a smoke cloud the whole world will see. We’ve seen all sorts of mega disruptions in recent years: Netflix, the iPhone, Prime 2-day shipping.

The only problem with this idea is that disrupting an industry is difficult. Really difficult. It’s akin to setting out to find your soulmate. Sure, it can happen, but is setting such a lofty goal upfront the right way to go? Or should you reframe your approach to improve your odds of success?

Dr. John Jaquish, author of the new book Weightlifting Is a Waste of Time, advocates for the latter. If you want to disrupt an industry, don’t start with that goal in mind. Instead, look to solve a problem for someone you know. Look back at that list of disruptions I mentioned above and you can clearly see the problem that each of them were trying to solve. That’s what allowed those ideas to become ground-shaking revelations—it was a side effect, not the original aim.

In his book, Dr. Jaquish tells a great story about where to find problems you can solve. You see, he’s the creator of the X3 exercise system, which is upending the fitness world. But that’s not where he started on this journey. He started with a simpler goal: to help his mom.

When Dr. Jaquish’s mother was diagnosed with osteoporosis, she had a tough decision to make: take the pharmaceuticals and hope to avoid the laundry list of unpleasant side effects, or forgo the drugs and hope to never fracture a bone. She was dead set: no drugs for her.

With an avid interest in human physiology and a father who held over 300 patents in his lifetime, Dr. Jaquish set out to create a device that could help strengthen his mother’s bones. He found inspiration in the unlikeliest of places: gymnasts, who, despite their small stature, have strong bones due to the infrequent impact of their movements and routines. Dr. Jaquish knew his mother wasn’t going to take up competitive gymnastics, but it offered a way forward.

Over the next few years, Dr. Jaquish iterated through several different design concepts for a device that would help his mother. Finally, the commercial version of OsteoStrong’s Spectrum System was unveiled. The device has been a huge success in more ways than one.

Dr. Jaquish’s mother no longer has osteoporosis, and his device has since been placed in over 300 clinics worldwide, helping over 600,000 individuals with their bone health.

Transitioning to a Wider Audience

Had Dr. Jaquish started out trying to reverse the effects of osteoporosis for all women, he might never have gotten his device off the ground. Not only for the money, effort and coordination required to reach such a wide audience, but also because it wouldn’t have been personal.

When you try to solve a problem for one person, it’s more than just a means to an end. That person matters to you, so you’re going to look for creative solutions to their problem. You are going to picture them in your mind every time you hit a stumbling block and want to quit. You’re going to keep striving for success because of that moment when you hand them the solution.

It was this focus and determination that saw Dr. Jaquish across the finish line, and it was the process that opened his eyes to the possibility of applying this science to a wider audience.

Dr. Jaquish asked himself, “What if I take what I’ve learned and apply it to a new problem?” That problem was obvious to him: weight lifters can work out for years without ever achieving the body they want. Clearly, something was broken in this industry that needed to be fixed.

Along with his partner Henry Alkire, Dr. Jaquish set out not to revolutionize the fitness industry, but to create a device that would get lifters better results with less effort. That was the focus.

The result was X3, a product that is making waves with professional athletes and experienced lifters alike. It’s a combination of Dr. Jaquish’s passions—science (specifically movement), problem solving, entrepreneurship and inventiveness—come to life. And it all started with one person and one problem: helping his mother deal with her osteoporosis diagnosis.

The Best Way to Disrupt an Industry

Disruptors don’t set out to be disruptors. That’s like saying you want to be famous—it’s hollow and vain. It’s all about you. It has no meaning behind it, nor does it offer value to the world.

Wanting to disrupt an industry is fine, but the way to get there is to start with one person and one problem. To go big, start small. There’s no better way to know that your idea has potential than if it helps someone you know with a problem they desperately want solved.

Other takeaways we see from Dr. Jaquish’s story: look to solve problems at the intersection of your expertise and passions. You’ll gain traction quicker when you have a solid foundation upon which to build. Also, don’t be afraid to partner up with someone who can complement your strengths. That’s the reason Dr. Jaquish brought Alkire on board—to fill in the gaps.

The idea for the next Netflix might be sitting in your head. To test it out, don’t go around the world looking for millions of beta customers. Look for someone down the street.