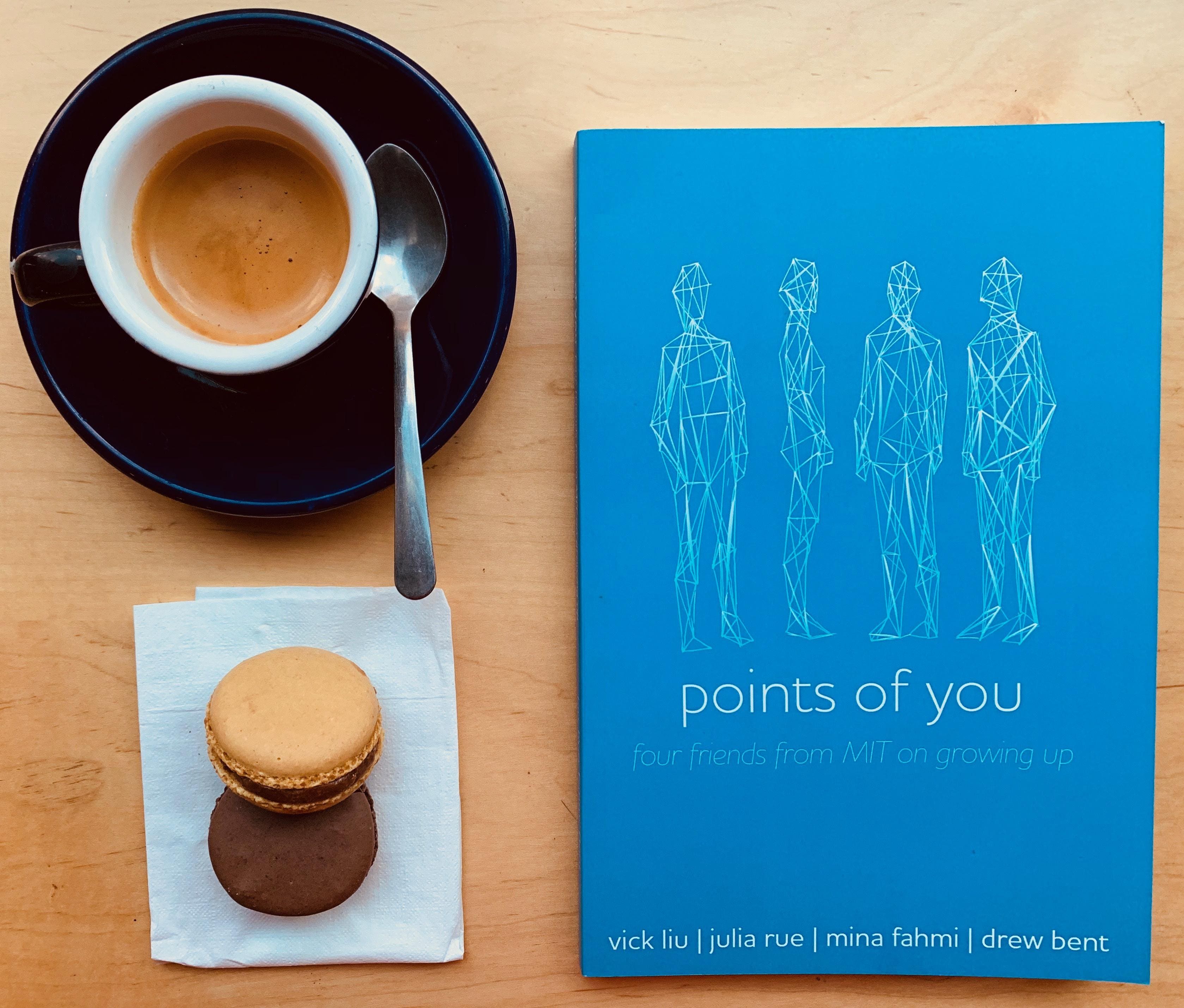 Normally  I’m talking with entrepreneurs about their startup company stories, but today I’m sharing a tremendous story from some inspiring young authors. A group of recent MIT alums —  Drew Bent, Julia Rue, Mina Fahmi, and Vick Liu — wrote a book in 2018 talking about the struggles every young person deals with as they head into adulthood: depression, relationships, and the inevitable mistakes of youth — particularly poignant topic given what teens and young adults have had to deal with the past year in both school and life.

Like many of the young people I’ve had the honor to speak with, they weren’t out for just themselves. Admirably, the group has pledged to donate the proceeds of their Spring 2021 sales to both the Khan Academy and Teach for America, and has partnered with TikTok influencers to get the word out about the book and the donation drive, garnering over 2 million views thus far.

Liz Seibert, one such Tik Tok Influencer, said “I was a bit skeptical sharing a book on social media with my audience, but after I read it, I knew it was a good fit. As a freshman at the University of Pennsylvania, the book gave me a sense of comfort and support that others were feeling the same way I do sometimes. It’s like getting a bunch of advice from some older siblings and I was really happy to share it with my audience.”

I had the pleasure of talking with two of the book’s authors, Vick Liu and Mina Fahmi, about the inspiration for creating the book and the process of taking it from idea to publication.

Mary Juetten: What’s the name of your book, and where did you all meet?

Vick Liu and Mina Fahmi: Our book is called Points of You. You can find it on Amazon!

The four of us (Drew, Julia, Mina, and Vick) wrote the book together while we were undergraduates in university at MIT. We all come from relatively different backgrounds and studied different subjects in university.

Mina studied Mechanical Engineering at MIT, graduated in 2019, and is currently a Technical Program Manager working on neural interfaces at Facebook Reality Labs. Mina grew up along the Chesapeake in Southern Maryland and is currently based out of New York City, NY.

Drew grew up in Northern California  and studied Physics and Computer Science at MIT, graduated in 2018, and is currently a Knight Hennessy Fellow at Stanford where he completed a MA in Policy, Organization, and Leadership Studies and is on leave from pursuing an MBA at the Stanford while he launches an edtech startup called schoolhouse.world. He has been interested in education reform ever since he was at Khan Academy in 2012 and 2013 as a software engineering intern.

Vick studied Finance at MIT, graduated in 2020, and is currently an Operations Associate at Scale AI, a tech startup out in SF focused on accelerating the development of AI. Vick grew up in Southern California, backpacking the Sierra Nevadas as a Boy Scout. He is currently based out of Boston, MA.

Juetten: How did the idea for the book originate?

Liu:  When I was younger, I was always afraid to talk about my feelings with others. I didn’t want to admit I was struggling as much as I actually was. I think this is especially pervasive among high schoolers who feel a need, for one reason or another, to put on a very put-together act. I just want people to know that they’re not alone. They’re not the only ones struggling and if they are, it’s absolutely normal. This book is everything I wish I had known when I was younger. It’s what I would tell my 16 year-old self if I could go back in time. I started writing the first draft when I was a sophomore in college, initially as something I wanted to give to my two younger brothers. One night while I was writing away on my computer, a roommate at the time suggested I turn it into a book and the project took on a life of its own after I convinced the three other authors to join.

Fahmi:  Vick reached out to me and the other authors with an idea to write a book in early 2018. From the beginning I was excited, but also nervous. I was motivated by the chance to help people feel less alone in their experiences growing up. But the thought of writing such personal material and putting it out for the world to see was pretty intimidating. Ultimately though, I think it takes vulnerability to demonstrate genuine empathy, and I’m glad we saw it through.

Juetten: What problem(s) are you addressing in the book?

Fahmi: Transitioning through early stages in life can be lonely and confusing. Many young people don’t have others to turn to with their questions. And the tricky thing is, there are no certain answers to begin with. I think this is especially important now during COVID, when people are feeling more secluded and distant than ever.

In this book we aimed to share real and unfiltered accounts of what we wish we’d known while growing up. By presenting the perspectives of four very different people, we hope that teenagers and young adults can find understanding and new points of view.

Juetten: Who is your audience?

Fahmi:  Our book is written for teenagers and young adults – especially those who are reaching the end of high school or are already in college. Over 3,500 people have already picked up a copy of our book so far, thanks to word-of-mouth from friends and family.

Juetten: How did past experiences help with this project?

Liu:  Before getting started on Points of You, I had worked on another project called TravlerPack relatively seriously. It was a custom sleeping bag specifically designed for Syrian refugees struggling to stay warm during the winter. I had taken the project from the initial ideation to prototyping, fundraising, manufacturing, and most recently distribution. One of the most important lessons I learned with TravlerPack is that meaningful results take a lot of time (and hard work!) to materialize. I’ve tried to keep this in mind as much as possible, especially when things aren’t going as well as I’d hope they would be.

Juetten: Writing a book is a bit like launching a startup. Do you have a favorite story from the experience?

Fahmi: One of my favorite memories is the night we spent hunkered down in Julia’s apartment getting the book finished. I remember spending hours just to get the spacing to be perfect. We ended up staying much later than expected, but it was a lot of fun to go through this journey together.

Liu: During the summer of 2019, we were negotiating a publishing contract with a publisher in China to try and take our book international. Drew was already in grad school while Mina and Julia had just graduated university. At the time, I was in Jerusalem teaching entrepreneurship classes to Israeli and Palestinian high school students. I was getting on a bus at the Jordanian/Israeli border when we had to have a last-minute phone call to discuss some final details before we planned on finalizing the contract. The data on the sim card I had bought was about to run out and I was also trying to pull up the email with my ticket on it while the driver kept asking to see it. The timing couldn’t have been worse and we never published in China, but it’s a memory that has always stuck with me.

Juetten: How do you measure success and what is your favorite success story?

Liu:  I would consider it a success anytime we find out that someone has read our book and took something meaningful from it. One of my favorite success stories is from the time a mother told us about how her daughter in high school found it reassuring that college students had gone through the same struggles she was currently going through. The mother also told us that she would also dip into the book every now and then to get a sense of what her daughter might be worried about. We hadn’t anticipated that, but it’s something we’re happy to hear.

Juetten: What’s the long-term ambition for your book?

Liu: I just hope that a few young adults read our book and learn from some of our mistakes, plus hear another perspective. What I really hope though is we help a few high school or college students see the world in a slightly different light.

Thank you to Vick and Mina for sharing and to all four authors for having the courage to be so vulnerable . As a parent of adult children, I saw how they kept issues to themselves during their teenage years. The book itself is doing considerable good, and the drive to raise money for worthy charities is truly inspiring. #onwards.